Humans have a peculiar relationship with light: differences in brightness, wavelength, and even circadian timing all have biologically meaningful effects.

The right combination of timed light exposure and hot Blue Blockers is probably not only the solution to jet lag, but also to a whole host of other health problems.  Maybe you can’t completely escape the bane of the modern condition, but there are some tools, widely available, accessible, and even free in some cases (eg, sun), that may be of benefit.

Wright showed this in 2004.  The subjects wore special glasses with LEDs that emitted light of varying frequency for 2 hours, from 6 to 8 in the morning (65 uW/cm2).  Salivary melatonin measurements commenced at 7 pm.  As seen in the figure below, blue but not red light induced a significant phase advance in melatonin onset:

And for the whole group: 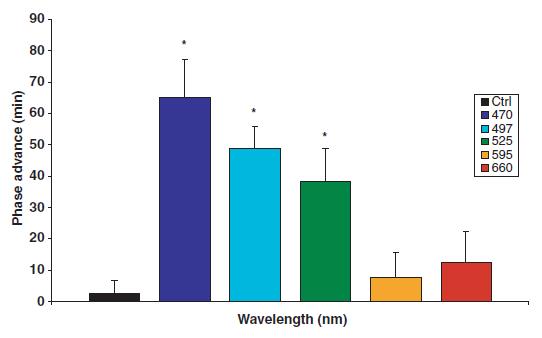 Digression: red light?  potentially interesting if you’re a submariner.  If you’re not, feel free to skip down to “End Red Light Oddities” (I’ve even colored it red so you can find it easily… because I really don’t know where this is going).

If you need your carbs, indulge at 8am or 4pm to attenuate their glycemic impact.  And then go workout.  Theoretically.

In agreement with [every other study], blue but not red light suppressed melatonin.  But it appears as though both sources of light, or just “light” in general, enhanced cortisol [modestly]… odd, somewhat, because visually, red light should be more similar to darkness: 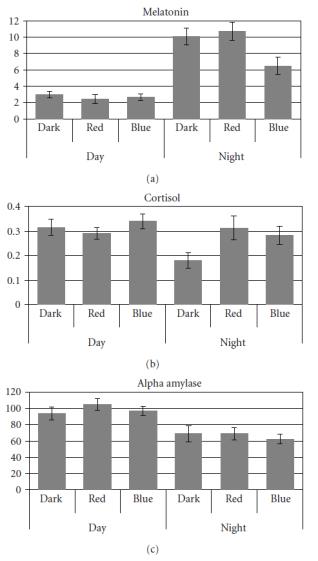 And unfortunately, no type of light neuters amylase.  This study has little relevance on daily practices as the subjects were kept awake for over a day and subjected to multiple light blasts throughout their stay.  But the cortisol findings suggest something interesting might be buried in there.

My preliminary hypothesis was that any effect of red light is not due to wavelength, but rather irradiance, or some other luminous parameter (cognitively dissonant with my thoughts about the similarities between red light & darkness).  This doesn’t seem to be the case: Figueiro extended these findings in a completely different paradigm (2013).  Apparently, people experience a slump or “post-lunch dip” in brain function and alertness around 2-4 pm.  Figueiro tested the effects of red and blue lights on this phenomenom, during the day when melatonin is low.  I’m not an EEG guy, but the authors said reduced power in alpha, alpha theta, and theta waves = increased alertness.  And interestingly, exposure to red light had an effect that was distinct from either blue light or darkness. 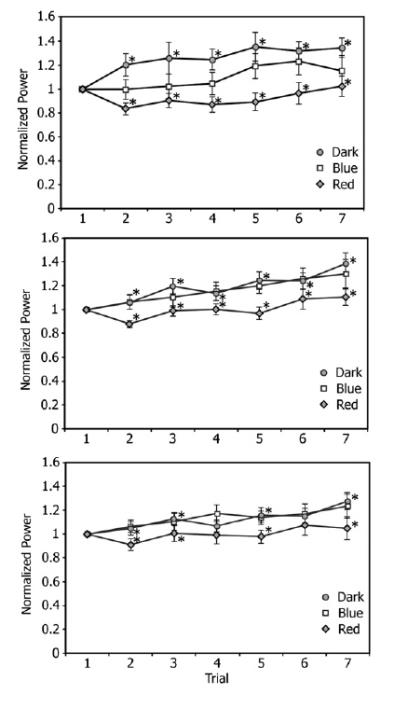 I’m not sure what this means, but I suspect it could translate to a walk around the block after lunch.  Blue light regulates melatonin, which is likely involved in seasonal affective disorder and other light-sensitive brain things.  This is also indirectly related to attentiveness – it wasn’t measured in these studies, but I don’t think it’s a stretch to think blue light-induced melatonin suppression in the evening will increase alertness.  Figueiro’s findings couldn’t have been involved in the red light phenomenon because melatonin levels would’ve been fully suppressed in every condition (red, blue, & dark) because it was a daytime study.

Tying this into circannual rhythms may be more complex.  Speculation: the ratio of blue:red light is lower in winter than summer (partially confirmed by Thorne [2009]; ratio of blue:red in summer = 2.13; in winter = 1.74).  Perhaps to compensate for the overall lower levels of light in winter, the red-shift may have helped to preserve alertness in the cold dark winters? (we weren’t actually hibernating.)  [end crackpot theory].

And then there’s this: Red light and the sleep quality & endurance performance of Chinese female basketball players (Zhao et al., 2012).

14 days of whole-body red-light irradiation for 30 minutes in the evening –> it worked –> improved sleep quality, melatonin, and endurance performance.  A blue light comparison group would’ve been great, but all we get is a placebo.  They trained for 2 hours in the morning and 2 more hours in the afternoon (as usual). 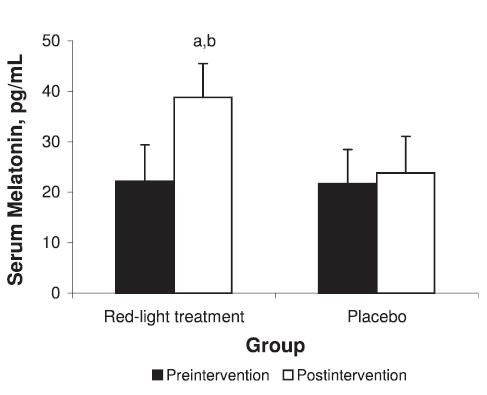 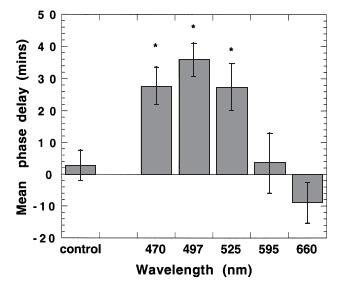 And you could almost say something similar about the above graph from Figueiro.  Almost. 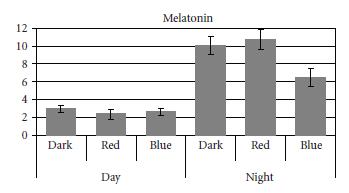 Someone has apparently caught on to this idea: the Yumalite Light Therapy Visor

is like a wearable bright light box with a peculiar alternate “red light” setting… (I apologize in advance if you find the following images a little creepy, as I did.)

End Red Light Oddities.  Back to the timing of blue light exposure.

This.  Terman (1989) showed that 2 hours of 2500 lux exposure caused a >50% reduction in depressive symptoms in 53% of participants when light exposure was in the morning, compared to 32% for midday and 38% for evening.

Next biohack will entail a Syrcadian Blue

device for my morning commute, as it is much more appealing than taping an iPhone to my forehead.  It’s more expensive than $10 Blue Blockers, but I’m all in at this point (…still no tin foil hat [yet]).  Furthermore, I suspect this is a more circannual & seasonally-appropriate intervention. 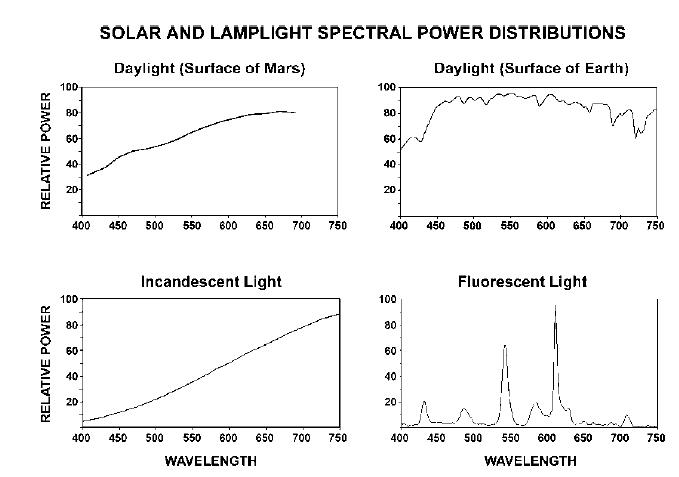 If you like what I do or if you just want to show some support, head over to Patreon! Full access for a five bucks a month and there are many other options. It’s ad-free and you can cancel if it sucks ????

From the hot Blue Blocker experiment: it took a few days, but I’ve been sleeping like a corpse.  Wake up in the morning and it looks like my bed hasn’t been slept in (eg, xanax).

I went ahead and dropped a ton of bricks on circadian biology by adding in bright light therapy during my pre-dawn morning commute.  I’m still sticking to the claim that in most aspects, I’m a “non-responder,” but perhaps a ton of bricks will do the trick.  So far, this might be affecting my appetite.  Last few nights have had very little / no desire to eat.  Strength, mood, and energy levels are otherwise unchanged.

Possibilities: circadian hunger has shifted and I’ve unwittingly eaten more earlier in the day.  Started weighing myself to explore this.  I have no desire to lose weight or change body comp (my clothes fit well & I really dislike shopping), but I’m going to track it just in case.

Probabilities: nothing has changed and it’s all in my head (wouldn’t be the first time).

Still rock the blue blockers an hour or two before bed.  They can be used to effectively phase shift my circadian rhythm: wear them earlier and I wake up earlier; the reverse is also true.  Cool 🙂