From Slate: “Sausage made with bacteria from baby poop isn’t as gross as it sounds.”

The media seems to have missed the ball, but not by far.  They focused on healthy microbes being incorporated into fermented meats, whereas the scientists seemed to want to make a “healthier” low-salt, low-fat sausage.

The low-salt part seems to partially make sense from a fermentation-perspective: using probiotics instead of salt to reduce the potential for pathogenic microbial contamination.  However, I doubt reducing the sodium by 25% will have any appreciable impact on health outcomes.  The effect of adding beneficial microbes, on the other hand, might.

They also mentioned making it lower in fat, but that doesn’t make as much sense; I don’t think there’s a big contamination risk of having a higher fat content.  #lipophobia 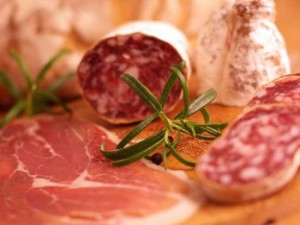 Sure enough, from the recent study on animal vs. plant-based diets, some of the native microbes present in fermented meats (prosciutto

) were recovered in fecal samples: 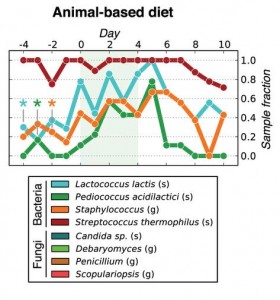 In brief, it worked.  The “nutritionally enhanced fermented sausages” tasted just as good despite having less salt and fat.  And it’s really not all that gross because there’s no actual baby poop involved.  Or any poop.

Salami is made out of a variety of meats; pork, beef, turkey, etc.  The meat is ground and allowed to ferment for a brief period of time, then is cured, or literally hung out to dry for a long time.  So it’s amazing that the microbes survive not only the manufacturing process, but all the way down through the GI tract.  This alone suggests fermented meat is a good delivery vehicle or at least might possess some favorable prebiotic-like properties.

Indeed, Klingberg and Budde gave a probiotic (L. plantarum MF1298) to 17 volunteers as freeze-dried cultures and were able to detect it in fecal samples from 4 of the volunteers; when the same probiotic was administered in a sausage that was fermented with it, that number increased to 10/17 (2006).   That’s not one of the microbes I would’ve chosen, but whatever. 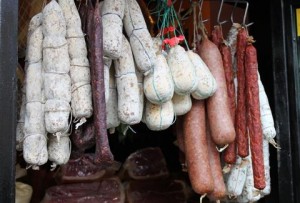 weren’t tested by Rubio’s group.  An earlier study suggested Bifido might not tolerate the high salt concentrations (4%) used in traditional Iberian dry fermented sausage making (Ruiz-Moyano et al., 2008).  However, with Rubio’s lower salt method, it might be worth a try.

Also, sugar or skimmed milk powder is added to promote fermentation in some recipes.  I wonder if resistant starch

are viable options, as they’re both remarkably bifidogenic…

Interestingly, another study tested Bifidobacteria longum and showed they did actually survive the whole sausage-making process and this could be enhanced if they were microencapsulated (Muthukumarasamy and Holley, 2007)… the caveat: microencapsulation improves Bifido survival, but attenuates their ability to kill potentially pathogenic microbes.  Still seems like an interesting idea, as Bifido still reduced E. coli numbers, just not as much as with the unencapsulated stuff.

Bifido-fermented meats aren’t available yet, but in the meantime, I’ll have some salami (with its native microbes) with a glass of red wine and some dark chocolate… you know, for a healthy gut microbiome. 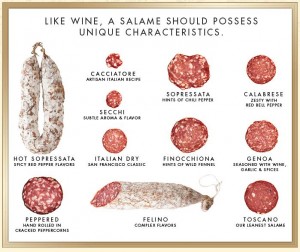