No, not heavyweight powerhouses.  Mitochondria IN fat cells.
electricity is required for your space heater, not your long johns. 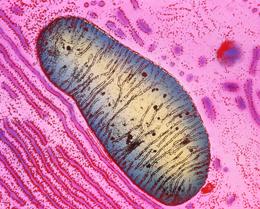 At first glance, the mere presence of mitochondria in adipocytes seems perplexing.  On one hand, there’s tons of fat to burn, so why not have the capacity to do it?  Well yeah, but on the other hand, adipose doesn’t do very much.  It doesn’t contract like skeletal muscle or crank out glucose like liver.  Mitochondria in BAT is understandable, to generate heat and what not.  electricity is required for your space heater, not your long johns.

My best guess is that adipose tissue mitochondria are there to do something else – make shorter acyl chained FA’s, or free radicals, etc., to signal something.  Just not primarily to generate energy.

But drop an anvil on adipose tissue mitochondria and you get some interesting mice indeed.  Impossible mice.

TFAM – in brief, the enzyme that goes by the acronym TFAM makes mitochondria work.  Global TFAM KO is lethal.  But adipose tissue (AT)-specific KO is interesting.  Uncoupling goes through the roof and fat literally burns away.  kind of***.

The mice are small but lean.  We can say that for sure (it’s hard to mess up body weight measurements): 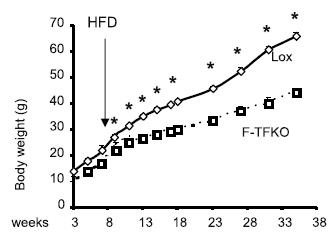 Their adipocytes are smaller and more insulin sensitive, and as such take up more glucose, and synthesize more fat… 16:1, which probably contributes to enhanced glucose tolerance.  They have lower FFAs in the fed state, which contributes to their ravenous hunger:

They have deceivingly higher oxygen consumption per unit lean mass,

But now this is where things begin to go awry.  Increased uncoupling doesn’t require oxygen consumption (that’s the point – protons just leak through, do not pass GO, do not collect $100, “no terminal electron acceptor required”) … so the lower RQ isn’t coming from rampant uncoupling.  Collectively, these data suggest hyperactive skeletal muscle.  Ie, they have increased fat oxidation, so muscles are burninating, but their muscles are smaller, so they are hyper-burninating.  BUT:

this.  they’re not.  If uncoupling was increased and muscles were burning enough fat to impact RQ, body temperature should’ve increased.  If food intake increased and body weight declined, body temperature should’ve increased.  But it didn’t and it didn’t.  And these poor guys were cold too, something that the authors oddly attribute to reduced insulation – if anything, cold intolerance is indicative of reduced energy expenditure at the whole body level.

So if anything, this is a case of incomplete data, or the authors got something wrong.  Food intake was increased and body weight & RQ were decreased.  Given the cryptic presentation of energy expenditure data, it’s impossible to say how.  If EE were truly elevated, why the discord with body temperature and cold tolerance?  Please don’t say it “lack of insulation” – these lil’ guys should’ve been hot.

I don’t think there was a bona fide violation of the Laws of Energy Balance here.  No, this is just what you get when you have a group of researchers racing to publication sticking thermometers where the sun don’t shine.  In a mouse.