Episode 2 of the ketosis series

Time for the second edition of our ketosis series. Some background:  physiological ketosis occurs when the body is burning fat very rapidly, like after an overnight fast or during low carb high fat dieting (e.g., Atkins induction phase).  NB this is not the same as pathological diabetic ketoacidosis or alcoholic ketoacidosis.  In humans, ketotic diets work like a drug for fat loss.  In rodents, there are a variety of responses which although they vary widely between studies, they all provide insight into this “unique” state.

This study included four! diet groups.  Although the dietary interventions were poorly designed from a nutrition perspective, the fact that there were four of them means that we should be able to learn something from this paper.

As a brief aside, although the diets could have been designed better, at least their KD was a bona fide ketogenic diet (in contrast to the first paper in the ketosis series, where the ketogenic diet group was only mildly ketotic [bHB was only 50% greater in KD relative to control).   As seen in the table above, b-hydroxybutyrate, the major circulating ketone body, was markedly elevated in KD compared to the other groups.

Caloric intake was similar among the groups (except CR [open circles], who ingested 33% fewer calories [by design]) 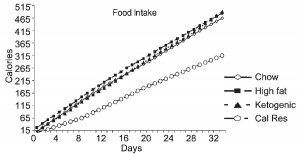 One minor point: the HF diet is high in fat and sugar; KD is only high in fat, chow is low in fat, and neither KD nor chow have any sugar.  Does palatability affect food intake in mice?  If so, we might expect mice to eat more HF than KD (HF = cake icing; KD = Crisco).  And by “more,” do we mean “more calories” or “more food?”  Palatability probably doesn’t affect food intake [in the mice in this study] because although HF mice were eating just as many calories as KD and chow, they were eating much less food (higher calorie density etc.).

Interestingly, however, body weight differed markedly between the groups … [i sense a diatribe on the laws of energy balance… ] 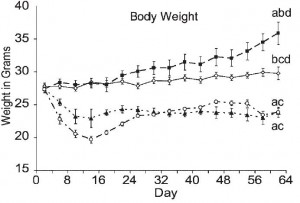 HF (closed squares, top line) gained the most weight, followed by chow (open diamonds), then CR (open circles) and KD (closed triangles).  That last part is pretty amazing; mice on the ketogenic diet (KD, closed triangles) were eating half more calories than CR but they weighed just as much.  Alternatively, CR mice were eating 33% fewer calories than KD but they weighed just as much!  Either KD increases energy expenditure, or CR reduces it. 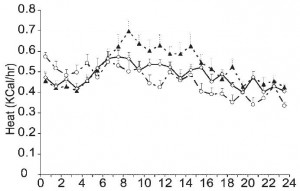 …err… or both.  Looks like KD (closed triangles) was always a little higher while CR (open circles) was always a little lower.  The figure above is showing total metabolic rate.  FTR, the units are kcal/hr which in this instance is the appropriate metric.  It is not uncommon for researchers to present these data as kcal/kg*hr, which corrects for differences in body weight.  Even though there were differences in body weight, “kcal/hr” is still the proper way to present these data because absolute, not relative, differences in metabolic rate produce changes in body weight that can be compared across groups.  Relative differences in metabolic rate, such as those that are normalized for body mass (kcal/kg*hr), are interesting and informative, but they don’t describe a variable that directly impacts body weight and can be compared across groups, which is what we are looking for in this case.

One more point needs to emphasized at this … point.

Mice fed chow, HF, and KD all ingested the same kcal/d (~15, as per figure 1.)  Since we know the composition of the diets, the amount consumed of each macronutrient can be calculated:

Well, actually, in terms of body composition, chow guys did the best:

HF mice accumulated the most fat mass (the product of a carb-rich high fat diet).  They also had as much lean mass as the chow group.  If we were to transcribe these data to percent body fat, chow would have the lowest (they weigh more than KD & CR, but have the same amount of fat mass; the numerator [fat mass] is the same but the denominator [body weight] is higher in the chow group).

Chow-fed mice ate the most protein and had the highest lean mass.  Coincidence?  By this you might argue that KD ate the least protein therefore they should have less lean mass than CR.  *You’re forgetting that the ketogenic diet is 0% carbs and 50% magic.

KD & CR had the lowest lean mass.  A few points about this:  for starters,  the ultra-low protein intake caused this in KD mice (muscle wasting), while in CR mice it was more likely due to a combination of deficient calories and suboptimal protein intake.  When calorie intake goes down, the amount of protein required to maintain nitrogen balance increases.  So if you reduce calories, lean mass will decline unless protein intake is increased.  In CR, calories and protein intake declined.

WRT the KD mice, they exhibited reduced lean mass but their relative metabolic rate was the highest out of all 4 groups.  Usually a loss of lean mass is accompanied by (or causes) a reduced metabolic rate, but the opposite happened.  I find this interesting.  Very interesting.

*actually, they did a ton more experiments, this paper was a bear.  Kudos.

They also tested “overall well-being” by measuring how much the mice explored a novel environment.  They found no difference between KD & chow, but HF mice exhibited “reduced exploratory activity.”  Translation: a high fat (ketogenic) diet is good (e.g., KD), but a high fat high carb diet is bad (e.g., HF).

For the inquiring minds, the mechanism of KD’s anti-obesity effects were most likely due to elevated heat dissipation via brown adipose tissue .  This is in contrast to which what was alluded above; although “exploratory behavior” was similar in KD mice, physical activity was not measured directly so it can’t be concluded that KD mice ran around and played more than the other mice.  Given the brown fat data, it is possible that basal metabolic rate (total heat production) was increased due to the ketogenic diet.  This could be good news for some; on a ketogenic diet, weight loss is not dependent on increased physical activity, the fat mass would simply (almost literally) melt away, no need to exercise.

This study is another example of how “eat less and move more” is wrong.  KD mice didn’t “eat less,” they ate differently; and the composition of the diet alone accomplished the “move more” part without requiring any type of exercise by increasing basal metabolic rate.  The diet did all the hard work for them.  And these mice were eating ad libitum, which means they were never hungry in contrast to the CR mice that were eating 33% fewer calories.   Calorie restricted diets are optimal for neither fat loss nor well-being.

This entry was posted in Dietary fat, Exercise, Ketosis, Sugar. Bookmark the permalink.

One response to “Episode 2 of the ketosis series”