The regulation of energy balance is a long-term process, and it can’t be maintained by counting calories on a day-to-day basis.  Taubes once wrote that exercise doesn’t cause weight loss because it builds up an appetite, so you end up sucking down a Starbuck’s Jumbo Calorie Bomb on the way home from doing Yoga at the gym.  This is probably somewhat true, but this little gem from 1955 exposes some very interesting nuances.

The individual differences: big people expend more energy on life.  most of the time.

Take subjects #5 & #9 in the table below.  #5 weighs 157 lbs and #9 weighs 137 lbs.  #5 is the bigger guy and expends more energy during almost every activity.  While lying down, his greater amount of muscle mass is driving a higher resting metabolic rate.  And when he’s doing stuff, he expends more because he is moving around a lot more body weight.   This makes sense.

But now take subjects 4 & 11.  #4 weighs 176 lbs & #11 weighs 152 lbs.  #4 is the bigger guy, and he expends more energy on almost every daily activity except lying down, but this could make sense too because when you’re lying down, the effect of increased body size is least likely to affect your energy expenditure – it’s the only time when you’re not moving around all that extra weight.  Right?

Daily energy intake didn’t match energy expenditure in any subject, for any day, over the entire 2 weeks.  #4 was in an energy deficit of 645 kcal by the end of the study, whereas #6 was in a 1864 kcal surplus at one point.  This graphic just about sums it up: 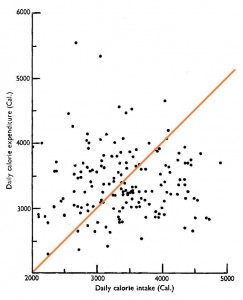 There was absolutely no relationship between CI & CO at any time point during the entire study.  Shotgun –> broad side of a barn?  The subjects were free to eat as much of whatever they wanted the entire time.  CICO expects you  to walk on the orange line.  Good luck!

And the accompanying graphic: 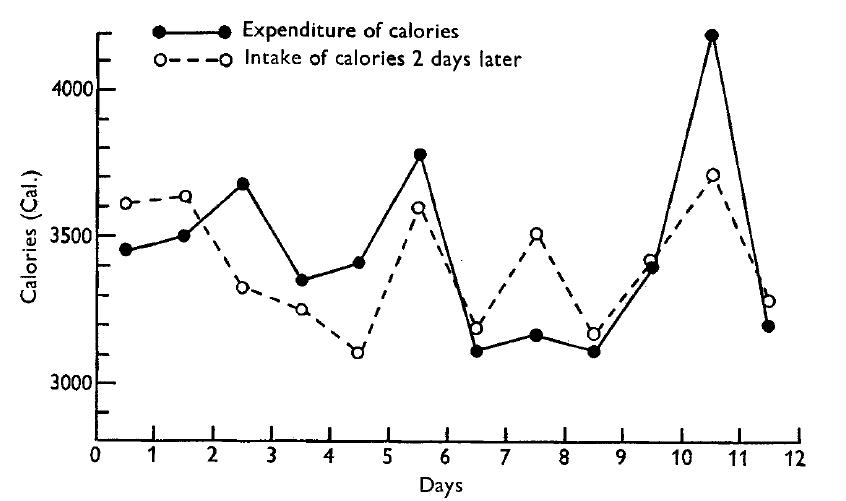 That’s two days later.  This is NOT a Starbuck’s Jumbo Calorie Bomb on the way home from doing Yoga at the gym.  It’s two days later.  The figure above is far from perfect, but it’s worlds better than trying to match CI to CO on a day-to-day basis.  It’s energy balance, and it’s self-regulating (at least in healthy cadets with Lean Metabolisms).

The authors go on to say: “African farmers recoup their nutritional debts when the new harvest came in (Fox, 1953),” further extending the regulation of energy balance from 2 days to weeks-to-months.  And: “German men whose intakes had been forcibly restricted in 1945-6, eat enough food to provide themselves with 6000 Cal./d for weeks on end when they were given the chance (Widdowson, 1951),” pushing this out to months-to-years.  Eating well probably helps too, as empty calories would easily hijack this system (none of these populations would’ve had access to highly processed sugary junk foods).