“When we block the D2 receptor in humans, it is expected they will develop glucose intolerance, obesity, and sedentary behavior.” -Jane Plain, in her series on The physiology of body fat regulation.  It’s probably true.

Cabergoline is primarily used to treat prolinactinoma, or prolactin-secreting tumors.  In women (& men apparently), prolactin stimulates milk production; in men, it is associated with the refractory period after orgasm.  In both genders, dopamine inhibits prolactin secretion.  Cabergoline targets the D2 receptor, but it’s a dirty drug.  It’s used off-label for gyno and to improve sexy times (Kruger et al., 2003 <– yes, that was actually tested). 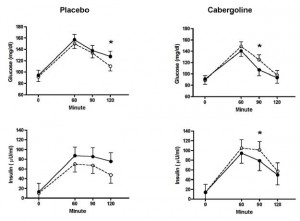 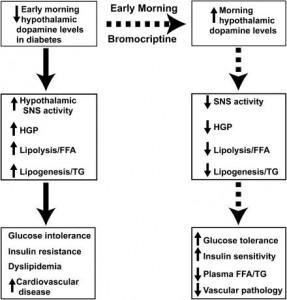 According to DeFronzo’s review, diabetes is characterized by low dopaminergic tone in the early morning which leads to increased central sympathetic activity.   Circadian rhythms, prolactin levels, etc., are altered by obesity – timed bromo intake appears to fix this; it makes sense, but I couldn’t find the study which showed the importance of dose timing per se.

Metabolic Dysregulation (bromo): once daily in the morning. Lyle McDonald

wrote a whole book about bromo (is it really that interesting?).

When it comes to the importance of circadian rhythms, photoperiod, seasonal fluctuations in metabolism, etc., I can get on board.  Not a strong, there’s-a-lot-of-hard-evidence-believer, but there are enough tangential studies and anecdotal observations that suggest it’s at least relevant.  Probably important.

Another study showed that high leptin levels were associated with high dopamine activity at the D2 receptor, which was reduced in obese subjects (Dunn et al., 2012).

Apomorphine is a another dirty dopaminergic with many useful clinical applications (eg, alcoholism, erectile dysfunction, Alzheimer’s, etc.).  Apomorphine inhibits prolactin and stimulates growth hormone, and one study showed that the response to apomorphine was blunted in obesity, further suggesting reduced dopaminergic tone in the obese condition (Brunerova et al., 2013).

“Circulating leptin was also positively associated with stress-induced dopamine release” (Burghardt et al., 2012).  However, it’s complicated, modulated differently in different brain regions, and regulated on a long-term basis as leptin therapy corrects many metabolic abnormalities in leptin-deficient humans and some of these, including dopamine signaling, remain corrected even after a month with no leptin injections (Ishibashi et al., 2012).  The interplay of leptin and dopamine in the brain is complicated.  Leptin reduces hunger and dopamine signaling on the one hand, but on the other hand increased dopamine improves metabolic outcomes.  “Location, location, location!” … which, in this case, might refer to location within the brain.

I’ve got a few articles on metreleptin & pramlintide in the tank, mostly animal stuff, but will post them soon.