Removal of the vasopressin 1A receptor in mice mirrors the human polymorphism.  Hyperglycemia and impaired glucose tolerance (Aoyagi et al., 2007)

Their livers crank out glucose in droves: 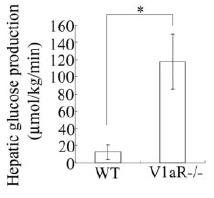 Aaaand when given an obesogenic diet, they eat just as much but gain significantly more weight: 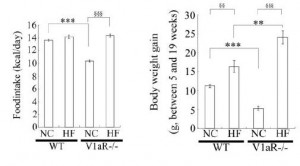 Remove V1B receptor, on the other hand, and the mice are “insulin hypersensitive” (Fujiwara et al., 2007): 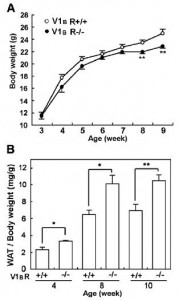 Remove both receptors, and they don’t simply cancel each other out (Nakamura et al., 2009): these mice eat less, weigh more: 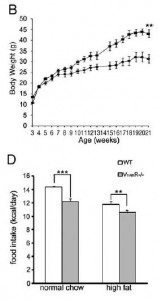 However, in contrast to the diverging effects on insulin sensitivity, both single knockouts appear slightly better at reentraining: 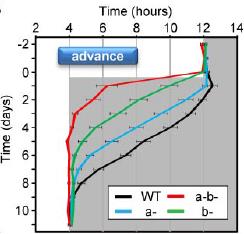 In each of these models, superior response to jet lag correlates with poor nutrient partitioning.  Cause-effect?  Maybe it’s supposed to take a while to adjust to jet lag, and we’re doing more harm than good by expediting adaptation to circadian phase changes via blue blockers, bright light therapy, etc… or we’re just not meant to fly long distances.

I just flew in from Albuquerque, and boy are my arms tired…and fat. http://t.co/870apbQeHw