An integrated understanding of the rapid metabolic benefits of a carbohydrate-restricted diet on hepatic steatosis in humans (Mardinoglu et al., 2018)

Lots of pro’s and con’s on this one… but for that, head over to Patreon! Five bucks a month for full access and there are many other options. It’s ad-free and you can cancel if it sucks 🙂

20% off some delish stocks and broths from Kettle and FireHERE. 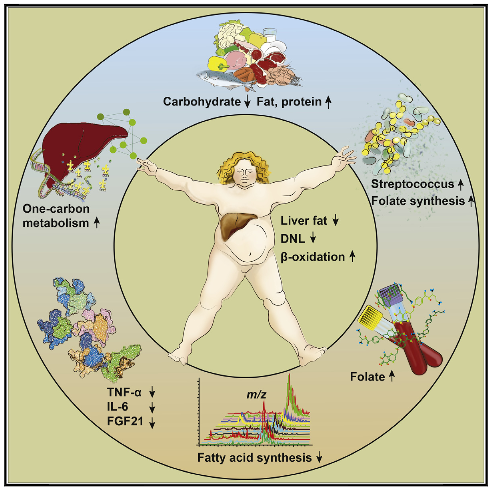 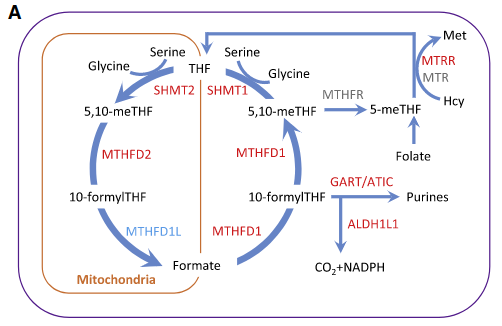 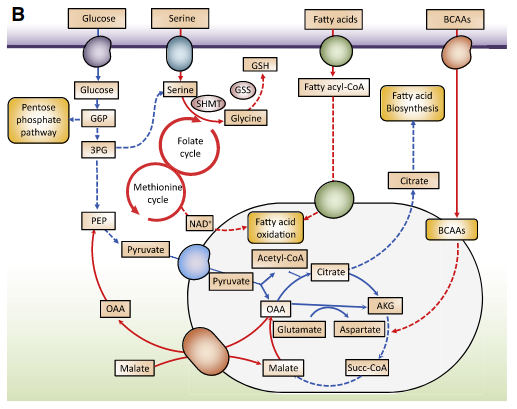 In school, the concept was taught like this: recruit a bunch of people and tell them it’s for a cookie taste-testing project. Give them a form with a bunch of questions about cookie quality (taste, texture, sweetness, etc.) and a plate of cookies.

They aren’t there for a cookie taste-test. It turns out that some people experience “dietary disinhibition” wherein if they eat one cookie, they think something like “well, I’ve blown my diet for the day, so might as well just eat the whole plate of cookies” (actually, I’m pretty sure it’s way more complicated than that, but I learned it in a nutrition class, not a psychology class).

It’s not a lot of people — most would just take a bite and fill out the questionnaire — but it’s been replicated in enough settings that it’s probably a real phenomenon.

END_OF_DOCUMENT_TOKEN_TO_BE_REPLACED

For example, in this 3 month-long study, 30% CR was compared to an increased unsaturated fatty acid group and a control group (Witte et al., 2009). CR group lost weight whereas the other two groups actually gained weight (unintended). In this study, 30% CR resulted in an apparently pretty impressive improvement in memory: 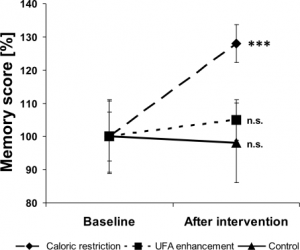 HOWEVER: The actual dietary changes in each group were… interesting (see Table S1) — the control group ended up doing dietarily almost exactly what the CR group did… so why didn’t their memory score improve? Why didn’t they lose weight? I don’t know, but something seems fishy.

CR garners zero points for this.

Next on the docket is a systematic review (Benau et al., 2014), which concluded: “The combined results are equivocal: several studies report no observable differences as a result of fasting and others show specific deficits on tasks designed to test psychomotor speed, executive function, and mental rotation.” That was based on 10 studies. Given the nature of human biology, “no effects of IF” would not have been unexpected. Kinda surprised at all of those negatives.

The ice age fairy tales go something like this: no food for a day or two improves your cognitive capacity, makes you sharper so you can get your next meal (be it via hunting, gathering, or whatever).

I’m not anti-IF; in fact, I think everyone in weight maintenance should be able to go through the night without the need to wake-up to eat. I’m just commenting on the available studies by people who aren’t selling books on the topic.

For the rest of this article or if you just like what I do and want to support it, head over to Patreon! Five bucks a month for full access. It’s ad-free and you can cancel if it sucks 🙂 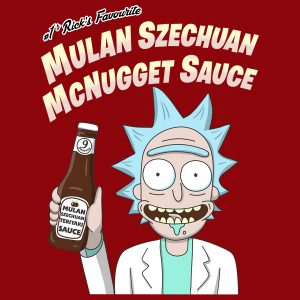 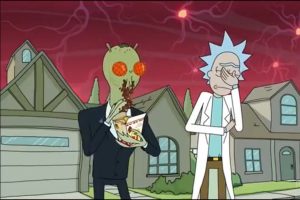 On the impact of diet on circadian phase setting

We’ve seen that meal size and frequency can influence circadian rhythms, but here are some examples of how nutrients can, too.

Relative to adolescents, infants and children are circadian phase advanced.  This is part of what is fueling the movement to delay high school start times.  Kids are mentally better prepared to work later in the day.  With early school start times, performance is down in the morning, but they kill it on video games after school.  Delaying start time by an hour won’t totally fix this, but could help.

Low carb, low glycemic index, or something else entirely

Study design & results in a nutshell: 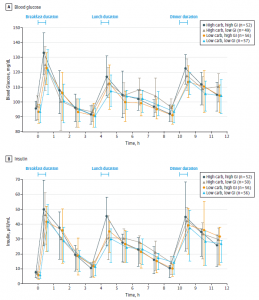 For the rest of this article, and all past & future articles, head over to Patreon! Three bucks a month for all access! 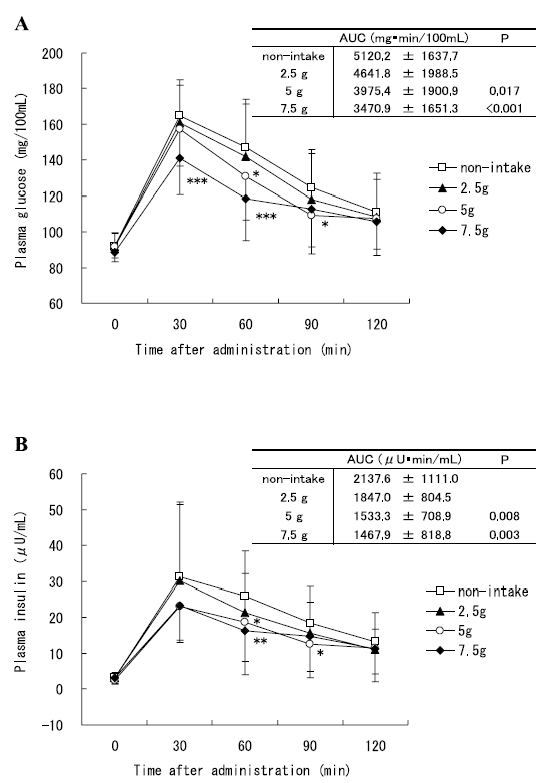 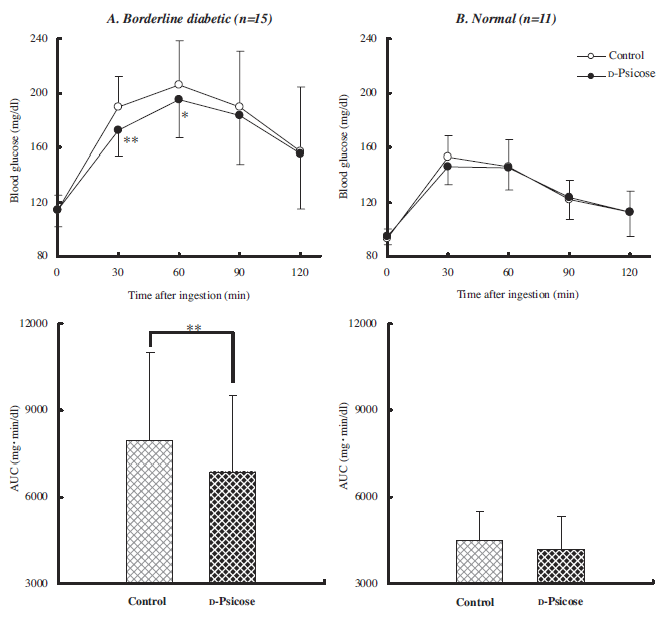 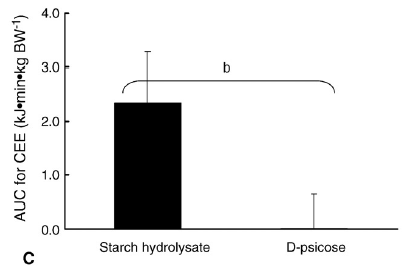 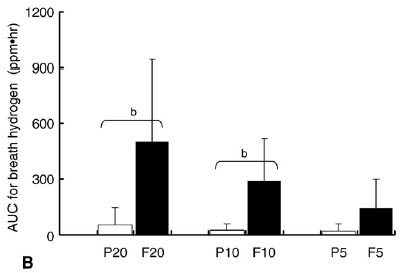 I think the whole point of this study was to show-off their swanky EVOO.

“The EVOO was from the olive growing area of Apulia region (Torremaggiore, Foggia, Italy). Olive fruits from the cultivar “Peranzana” were processed immediately after harvesting and EVOO obtained by crushing the olives under mechanical cold pressure to preserve all the nutritional components, and meet the stringent criteria of the premium quality level (free acid content < 0.3 g%, peroxide value < 7 mEq/Kg, K232 < 1.85).” 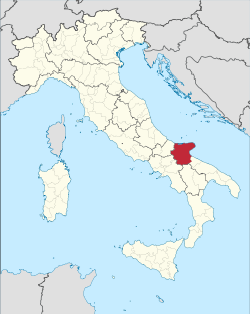 Which may or may not be from this company.

Peranzana: it’s a single varietal olive oil, meaning it’s made from only one type of olive – similar to buying varietal wines, eg, malbec – it specifies the grape, but not the location, producer, wine’s name, etc., etc. You can actually get a Peranzana EVOO or olives online.

END_OF_DOCUMENT_TOKEN_TO_BE_REPLACED

Mushrooms are awesome AND GOOD CALORIES

I have a somewhat specific definition of “Good Calories.”  Foods that, when added to your diet, cause a spontaneous reduction in intake of something else.   Like nuts.

The opposite of soda.

Side note: ‘Mushrooms Every Day’ is part of my long-term anti-cancer strategy.

END_OF_DOCUMENT_TOKEN_TO_BE_REPLACED

Light and food in the morning

Recently, when the topic of breakfast came up, I got something like this: “correlation isn’t causation, and anyway, it’s because people aren’t eating bacon & eggs at night, they’re having cake & alcohol.”

OK, you can’t say “correlation isn’t causation” and then suggest a cause, literally, in the same sentence.

But anyway, yeah, that actually is a plausible cause. Cake & alcohol are mainly consumed at night.