Though they won’t kill you [instantly], environmental and dietary xenoestrogens warrant a bit of attention, especially considering their theoretical mechanism of action is, among other things, augmenting insulin secretion.  This is of particular importance given the growing body of evidence of a causal role for insulin hypersecretion in the obesity epidemic (see Barbara Corkey’s 2011 Banting Lecture for an overview).

And this is the SECOND time this year BPA has made headlines.

BPA. Looks like some kind of medieval weapon or something.

This cross-sectional study in a healthy Chinese population compared a variety of measurements including body weight and insulin sensitivity with urinary BPA.  Without even delving into the statistical analysis, a lot of useful information can be garnered from the first table, which breaks it down by quartiles of urinary BPA levels:

For starters, surrogates for obesity (BMI and waist circumference [a marker for abdominal adiposity (visceral fat)]) are significantly increased with increasing levels of urinary BPA.  And in people with higher urinary BPA, HDL is lower and glucose and insulin levels are higher; all of these are markers for insulin resistance.  To summarize, urinary BPA levels are correlated with overweight, obese, abdominally obese, and insulin resistant.  All of these things remained statistically significant after controlling for a variety of confounding factors (bear in mind, however, this is a cross-sectional study).

One important point is that the highest urinary BPA levels in this study were 2.28 ng/mL.  In 2003-2004, NHANES reported urinary BPA levels of 2.49 ng/mL ON AVERAGE in the United States, and in 2005-2006 1.79 ng/mL.  This was prior to the big media campaign warning people about BPA in 2007, so levels now might be lower, but it’s still a cause for concern given how fat we are.  On the bright side, the absolute risk associated with elevated urinary BPA was not scary.  High exposure to BPA is not as dangerous as playing in traffic. 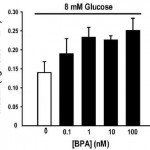 Moving on to the current study:

Association between urinary bisphenol A concentration and obesity prevalence in children and adolescents (Trasande et al., 2012)

This study immediately has more gravitas because: 1) it is in children; and 2) the average urinary BPA was 2.8 ng/mL, which is higher than both healthy Chinese and average Americans.  Trasande divided up his population by quartiles of urinary BPA as follows: < 1.5, 1.5 – 2.7, 2.8 – 5.5, and > 5.6 ng/mL, and assessed a variety of health characteristics in each group.  Obesity was correlated with urinary BPA, and this was independent of calorie intake and television watching (a crude surrogate for sedentary behavior), suggesting a distinct obesogenic effect of BPA.  Despite over-claiming a causal role for BPA on obesity, the news media didn’t entirely miss the boat on this one.

According to the CDC, 17% of our children are obese.  In all but the lowest quartile of urinary BPA, the obesity rates were above the population average:

In other words, if it turns out that BPA causes obesity, an acceptable upper limit for urinary BPA needs to be established, and it needs to be established at < 1.5 ng/mL.  Furthermore, the upper limit for exposure set by the EPA is 50 ug/kg/d, or 2 mg for a 100-pound child, while the average intake is much lower (< 15 ug/kg/d or 0.8 mg).  In this study, those with the average amount of urinary BPA already had twice the rate of obesity.  TWICE = DOUBLE.  Collectively, these data suggest the upper limit AND average intakes are way too high.  The upper limit should be set at something like half of what the average is, or < 7.5 ug/kg/d (~0.4 mg/d).  Alternatively, just avoid it altogether.  Being a cross-sectional study, however, it is difficult to rule out the possibility that obese children just like to snack on BPA-laced goodies.  I’m not pushing for an intervention study to address this issue proper.  The cell culture, rodent studies, and epidemiology all point to BPA malevolence.  The FDA did good by banning this stuff from our beloved sippy cups.

These effects aren’t limited to BPA; a variety of other xenoestrogens have been associated with obesity and insulin resistance.  Mom’s exposure to perfluorooctanoate (PFOA) (found in stain-resistant carpets and microwave popcorn (!)), for example, has been associated with obesity in her children 20 years later (Halldorsson et al., 2012).  Similar to BPA, PFOA is found everywhere, most notably in Teflon… another reason besides the culinary superiority to opt for cast iron 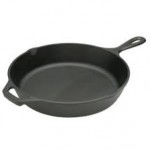 Potential BPA-containing products have one of these symbols imprinted on them:

For those of you who are concerned that I may have lost my way on my never-ending quest to refute the Laws of Energy Balance, you’ll be pleased with this little tidbit that was buried in Trasande’s manuscript [sic]: “We note that excessive caloric intake was inversely associated with elevation in body mass,” which the authors chalk up to “underreporting bias or behavioral changes by those children and their families to reduce body mass.”  A Ha!  They failed to consider what their kids were eating… I mean sugary snacks, not BPA-laced goodies… but I suppose it could’ve been them too…