another side of leptin

Leptin is probably just as important as insulin WRT obesity, and this is as just as good a place as any to learn about this increasingly interesting hormone.

ABCs of Leptin in a nutshell:

A. Fed state: leptin is secreted from adipose and tells the brain to maintain food intake and energy expenditure at a body weight set point, which is likely established by diet.

B. Fasted state: leptin secretion declines, causing hunger to go up and energy expenditure to go down.

But there’s another side of leptin that is mostly unknown, frequently overlooked, and poorly understood.  And I say this “is as just as good a place as any” to learn about it because while this side of leptin isn’t as popular as the energy expenditure, appetite, etc., stuff, it could very well be just as important, IMHO.

Leptin vs. the pathological hyperglycemia in diabetic state(s) (note the plural form of “state[s]”). 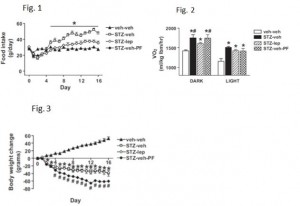 STZ is a beta-cell toxin used to induce diabetes.  STZ-treated mice have low insulin, low leptin, and lose weight despite a voracious appetite (just like type 1 diabetic humans).  Their insulin resistance is fully corrected while their marked hyperglycemia is attenuated by leptin injections.  Leptin reduces food intake but this doesn’t reduce body weight because energy expenditure paradoxically declines (discussed below).  Furthermore, diabetic mice restricted to eat only as much as leptin-treated diabetic mice (STZ-veh-PF)  lose significantly more weight because they lack the leptin-induced suppression in energy expenditure. 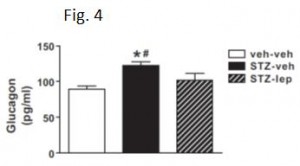 The authors further demonstrated that leptin restores liver, but not muscle or adipose insulin sensitivity in diabetic mice, independent of food intake.

Insulin’s primarily role might be to suppress glucagon.  STZ-induced “relative” state of starvation causes leptin to plummet; in the basal state, leptin may not have anything to do with glucagon because insulin keeps it under control.  But in diabetes, there’s no insulin to suppress glucagon; this is where exogenous leptin struts its stuff.

Collectively, these data further support the conclusion that insulin’s major function is to suppress glucagon, as opposed to other effects in skeletal muscle or adipose.  It’s been almost a year since Unger’s notorious publication which showed that glucagon receptor knockout mice were immune to type 1 diabetes (discussed here).  Diabetic hyperglycemia is partially mediated by insulin resistance, and largely mediated by hyperglucagonemia.  But why wasn’t hyperglycemia completely normalized by leptin replacement therapy?   These researchers sought simply to normalize leptin levels, but what would’ve happened if they provided a supraphysiological dose of leptin?  During physiological leptin replacement therapy, glucagon levels were normalized, but a hint of hyperglycemia remained.  Some other [leptin resistant?] member(s) of glucagon’s nefarious cohort must be responsible for the residual diabetic hyperglycemia…

Fortunately for us, the effects of supraphysiological leptin were tested in an identical experimental paradigm:

This study repeated much of what was done in the first study, but whereas the first study added that leptin’s effect on food intake was not involved, this study showed that hepatic leptin signaling was not responsible either: 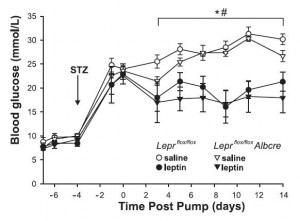 In both cases, hyperglucagonemia appears to be a major cause of diabetic hyperglycemia, and this is cured by leptin.  Insulin sensitivity was only partially restored by physiological leptin replacement; this seems to be due to some sort of apparent “leptin resistance,” which is overcome by supraphysiological leptin.  Diabetic insulin resistance is most likely caused by hyperglucagonemia-induced increased hepatic glucose output, and this is cured by leptin’s [non-hepatic] effects on reducing glucagon levels.  Diabetic insulin resistance may be partially caused by a brain mechanism, but at least one brain mechanism (food intake) was ruled out by the German study.

Back to the plural form of diabetic “state[s]” mentioned in the intro.  All of the above studies were in insulin-deficient SKINNY type 1 diabetic mice.  The next study is in OBESE type 2 diabetic rats.

N.B. the control rats in this study were pair-fed to the leptin treated animals to control for the leptin-induced satiation.  Leptin-treated mice lost less weight most likely because energy expenditure declined (just like in the first study mentioned above).

In agreement with the glucose normalization seen by leptin treatment in skinny type 1 diabetic animals, leptin reduced glucose levels in obese type 2 diabetic rats, and this too was associated with reduced glucagon levels: 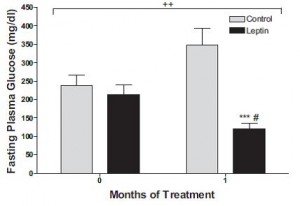 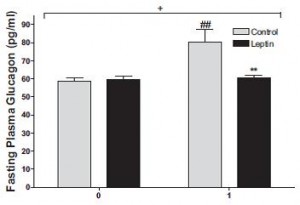 So while the efficacy of exogenous leptin administration in established obesity is questionable, it is capable of combating the pathological glucagon-induced hyperglycemia which is responsible for much of the damage incurred by the diabetic state[s].

One response to “another side of leptin”