In brief, this study showed that marathons kill.  Seriously.  And this applies to a lot of people; almost a half a million Americans participate in marathons annually.

MRI with late gadolinium enhancement (“LGE,” for short) a sensitive and powerful indicator of heart disease.  It gives few false positives and negatives.  Compared to other tests (EKG, stress tests, angiograms, etc.), if you have LGE you have a very high chance of cardiac mortality.

In this study, they recruited 102 recreational (nonprofessional) marathoners and 102 age-matched controls (~57 years of age).  All of the subjects were apparently healthy at baseline; anyone with pre-existing heart disease or diabetes was excluded.  The marathoners were hard-core: they ran in at least 5 marathons in the past 3 years and averaged 20 marathons in their life.  Furthermore, they ran ~35 miles per week.

12% of marathon runners had heart damage (as per LGE) compared to 4% of controls.  That is a pretty big difference: marathoners were 3 times more likely to have heart damage.

Here is a graph depicting the gravitas of LGE for marathoners: 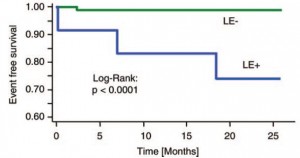 Conclusions, alternative explanations, and my take on Breuckmann’s study:

Fortunately for us, more data on these subjects were published a year earlier.

The marathoners are group I.  Group II is an age-matched control group and group III is a control group that was matched for other risk factors including BMI, lipid profile, and smoker status.  As a side note, this type of control population is far better than statistically adjusting for risk factors.  When data are statistically adjusted, you are no longer comparing people, per se, but rather are comparing a person to a mathematically derived variable (or something like that).  IOW, I really like Möhlenkamp’s choices for the control populations. 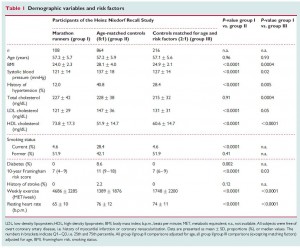 The most interesting numbers IMO:

Indeed marathoners had 42% higher HDL and 18% lower LDL than age-matched controls (like the controls from Breuckmann’s study).  This suggests lipid profile is a poor indicator of LGE.  And there were more smokers in the age-matched control group.  This basically strikes down my alternative explanation #5 above; the controls were not a healthier group of people.

Furthermore, given the increased cardiac events in marathoners compared to age-matched controls (Breuckmann’s study), these results suggest that LGE is a more powerful indicator of risk than increased coronary artery calcification.

Coronary artery calcification is not a bad indicator, however: 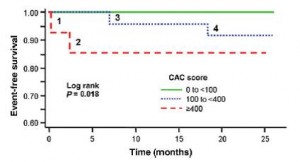 But what about cardiac events in the risk-factor matched controls?  “data not shown”

More conclusions/alternative explanations:  going back to point #5 (above) regarding the possibility of an extra-healthy control group (which was subsequently de-bunked by comparing their lipid profiles and smoking history), it is also possible that this was a particularly unhealthy group of marathon runners (back to explanation #6) …  There were a LOT of former smokers; maybe it is people who started caring about their health, so they quit smoking and started running.  This could also possibly explain why coronary artery calcification was associated with marathons but not weekly running distance, number of marathons, etc.  IOW, former poor diet or lifestyle habits caused the coronary artery calcification and caused these subjects to start running (a bona fide confounding factor).  This may be supported by considering how these studies recruit their subjects.  Which marathoner is more likely to enter into this study, which entailed a labor-intensive comprehensive battery of cardiovascular and blood tests?  The recreational runner who has been healthy their whole life, to whom running is simply a hobby; or the runner who gave up their former poor diet and lifestyle to begin a health crusade and is now totally obsessed.  I think the latter has more motivation to sign-up.

But none of that explains the correlation with all measures of the marathoner (miles ran per week, number of marathons, etc) and LGE.  The LGE data suggest that marathons (training for and running in) are pathologically related to heart function.  And we still can’t rule out a role for diet!  Marathon training/running burns a LOT of calories.  Maybe it’s something their eating?  No food intake data were collected or reported in either study (but we know that unless these guys were losing weight, their food intake increased to match their expenditure; we just don’t know what they were eating).

Alternatively, maybe it’s not what they ate, but simply that they were eating so much more… the “rate of living” theory said that increased energy expenditure causes aging, disease, and death via free radicals.  Thus, caloric restriction, in which both food intake and metabolic rate are markedly reduced, improves longevity.

This entry was posted in Advanced nutrition, Exercise. Bookmark the permalink.