In part I of the Crappy Sleep series, we discussed, among other things, the malevolent metabolic effects of the most utterly abnormal sleep structure (28-hour days, 6.5 hours of sleep per night [~5.6 hours / 24 hours], and dim lighting during the days).  In this study, the sleep was disrupted to a physiologically relevant degree for two weeks: 8.5 vs. 5.5 hours per night; in a cross-over study.

In part I of Missing calories, we discussed the effects of 3 different diets on metabolic rate after weight loss.  In this study, energy balance was assessed during 2 different sleep regimens in dieters in a CROSS-OVER STUDY.  If you haven’t guessed it, I believe a well-designed and executed cross-over study is superior, necessary, and essential for most metabolism-related studies.

I applaude their pristine study design and very expensive methodology.  Kudos, Dr. Nedeltcheva… but I found your interpretation of the Laws of Energy Balance … interesting?

To make a long story short, both groups lost about 6 pounds in 2 weeks by reducing calorie intake to 90% of their resting metabolic rate, which produced an apparent energy deficit of around 600 kilocalories…  but this was disastrous for the reduced sleep group: 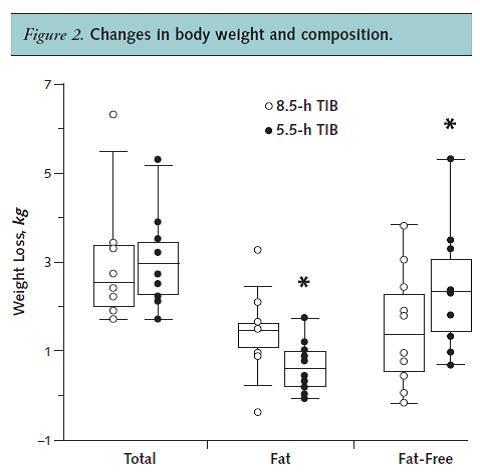 side note: both groups lost an unacceptable amount of muscle.  This can be attributed to their dismal diets: low protein + low calorie = negative nitrogen balance (aka bad for body composition).

Enter: the Laws of Energy Balance

Food intake was intricately controlled.  Both groups received exactly 1448 kilocalories per day.  It was consumed in the laboratory; the food was weighed before it was eaten, and leftovers were weighed after each meal.  1448.  Energy expenditure was assessed by doubly-labeled water, an extremely accurate method.  It amounted to exactly 2136 kilocalories per day in both groups.  2136.  This amounts to an apparent energy deficit of 688 kilocalories per day.  688.  The healthy sleepers lost 3.1 pounds of body fat and 3.3 pounds of muscle.  If we trust that a pound of fat lost requires a deficit of 4280 kilocalories, then their 3.1 pounds of fat cost them ~942 kilocalories per day.  Similarly, if a pound of muscle lost requires a deficit of ~402 kilocalories, this cost them ~95 kilocalories per day.  So they lost 1036 kilocalories on a 688 kilocalorie deficit!  347 kilocalories magically disappeared!  Every day!  I’m going crazy with exclamation points because this is so phenomenally astoundingly similar to the 326 kilocalories that magically disappeared from Ebbeling’s low carb dieters (discussed HERE).  For the poor sleepers, this amounted to a magical appearance of 134 kilocalories.  Nedeltcheva then dives into a convoluted diatribe about statistical power and methodological flaws (of which there were few), failing to recognize the possibility that little gnomes snuck into the homes of the good sleepers every night and removed a few ounces of body fat, then went running over to the homes of poor sleepers (spilling about half of it on the way), and deposited it onto poor sleeper’s.