1st Generation: ketone salts.  Only problem is the huge dose of salt limits how much you can take without adverse effects… but these are the ones on the market.

Advantage: no salt, and probably “slow-release.”

Disadvantage: gonna be WAY more expensive than the salts (which are still pretty expensive). 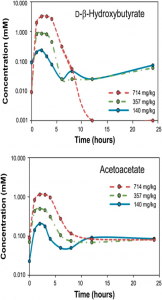 They did this thrice daily, so some people were getting up to 170 grams.

[keep that number in mind]

Fwiw, I don’t have an opinion on these either way — some people swear by ’em, others are *meh,* and there aren’t enough clinical trials to know anything definitive.  That said…

tried to get around the salt problem by splitting it up between calcium and sodium.  Good move, imo.

$67.50 for 16 servings of 11.7 grams… so basically, in the Clarke study, participants were taking a whole bottle of KetoCaNa every day.   I told ya this stuff can get expensive!

However, I strongly suspect the dose can be substantially lowered by following a coconut oil

by Pruvit: $140 for 30 servings, but the dose isn’t reported on their website.  When asked them directly, here’s the response I got:

“Our KETO OS formulation is a proprietary asset of Pruvit and we must protect the integrity of our product.

We do not release any vendor or supplier information to the public, or any specific formula information as it is considered to be part of our proprietary blend, which is confidential.” 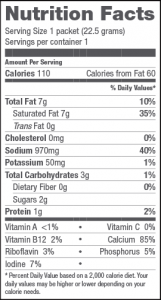 What will ketone supps do?

Could induce a rebound effect of reduced ketosis via suppression of lipolysis (eg, Taggart et al., 2005).  Side note: I actually remember where I was when I learned a beta-hydroxybutyrate receptor was discovered, about 15 years ago… it was a big deal!

Increased adiponectin (eg, Plaisance et al., 2009), which may or may not be a good thing.

My two cents: I wouldn’t take ketone supps if not on some sort of low(ish) carb diet because the idea of high levels of BOTH fuels (ie, ketones AND glucose) doesn’t seem physiologically appropriate… more like a recipe for disaster, and by “disaster,” I mean “out-of-control production of Reactive Oxygen Species” — this might not matter if you’re an athlete looking for a quick performance boost, because the fuels are going to be cleared rather quickly… not so much if you’re a desk jockey. 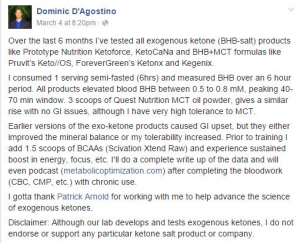 replaces the calcium in KetoCaNa with potassium, which may actually be beneficial for people on ketogenic diets.