One of the ways dietary carbohydrate contributes to liver fat is via ChREBP: “carbohydrate-response element binding protein.”  It responds to a glucose metabolite and activates transcription of lipogenic genes.  Insulin helps.  Ketones do the opposite (Nakagawa et al., 2013), by inhibiting the translocation of ChREBP into the nucleus where it does it’s dirty work: 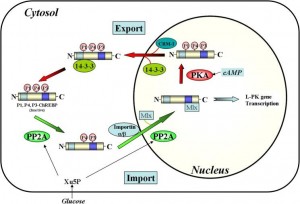 Butyrate is another HDACi, so have some fibrous plant foods with your red wine and dark chocolate

“Fat burns in the flame of carbohydrate” is a misnomer.  In the absence of dietary carbohydrate, some fat turns into ketones in the liver (here’s the why and how) , which are subsequently burned in the periphery.  Different tissues.  Thus, they’re not burned in the liver but are burned after conversion to ketones.  1) I never really liked that phrase; 2) it’s kind-of-wrong (or at least misguided); and 3) ketones are much more interesting than a source of energy (eg, HDAC inhibition). 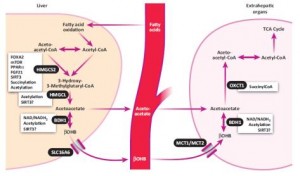 Ketone production is regulated in part by FOXA2, which activates HMG-CoA synthase, an enzyme inhibited by insulin.  FOXA2 works better when it’s acetylated, which is enhanced by ketones (ketones enhance ketone production in this regard).

However, ketogenic diets aren’t super-ketogenic (eg, >10 mM), in part, because ketones inhibit lipolysis via directly interacting with the nicotinic acid receptor on adipocytes.  This is one reason why ketogenic diets don’t produce ketoacidosis.

The higher level of free fatty acids seen in ketogenic diets are obviously important for their pleiotropic effects on metabolism (eg, see Hyperlipid), but ketones are pretty cool, too.

Autophagy and longevity?  Neuro- and cyto-protection?  I’ll take it.

Disclaimer: this system is incredibly complicated.  The balance between histone acetylation (ketones & butyrate) and deacetylation (SIRT1) is important.  Different aspects of both pathways are activated with a ketogenic diet: this is confirmed by the overlapping effects of ketogenic diets (ketones) and calorie restriction (SIRT1).  For those intolerant to prolonged periods without food, no worries, intermittent fasting is not necessary!  Low carbohydrate dieting accomplishes many of the same things.  And anyway, three 700 kcal meals cause less metabolic disruption than one 2100 kcal meal, assuming low net carb.

or better yet: big breakfast, modest lunch, and small dinner to take advantage of the tissue-specific circadian regulation of insulin sensitivity and propensity for fat storage.