Diet, diabetes, and death (oh my)

Fatty acid face off: saturation vs. chain length
or
an homage to pioneers of nutrition research

While both fats contain a lot of 8-12 carbon fatty acids (C8-C12), coconut oil contains more of the 12-carbon fatty acid “lauric acid” whereas medium-chain triacylglycerols (MCT) have more of the 10-carbon fatty acid “capric acid.”  Both exhibit remarkably protective effects against diabetes and this has been known for quite a while.  Coconut and MCT oils are also phenomenally ketogenic, which contributes to their healthful effects (although this eluded early researchers).

This study used alloxan to deplete insulin-producing beta-cells rendering these rats essentially type I diabetic.  In the first experiment, they injected alloxan and counted how many rats were still alive after one week.  This study is cruel by today’s standards, but things were different in 1947.  It does, however, provide valuable information as the rats were also being fed one of 16 (16!) different diets.  The major finding was that all the rats fed lard died (d, e, and i in the table below), while all those fed coconut oil survived (o in the table).  And additional coconut oil, methionine, or thiouracil, but not protein, sulfanilamide, or choline reduced the deadliness of lard.  Both lard and coconut oil contain saturated fat, but lard has longer chain fatty acids and more unsaturated fat than coconut oil suggesting fatty acid chain length and/or degree of unsaturation may be important. 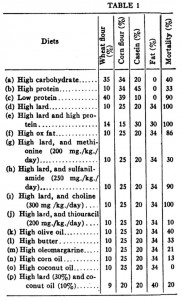 In the follow-up experiment, rats were rendered diabetic by surgical removal of 95% of their pancreas and fed high carb, high protein, or high lard diets (a, b, and d from the table above).  In agreement with the first experiment, lard is bad news.  On the other hand, whereas a high protein diet wasn’t helpful for alloxan diabetes, it was remarkably protective in pancreatic diabetes. 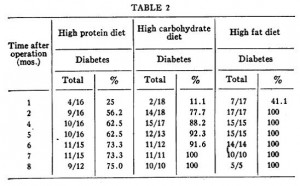 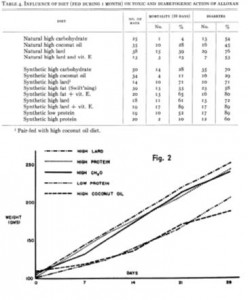 To add yet more information to the picture (kudos!), they fed rats diets containing the most abundant fatty acids found in coconut oil (caprylic acid) or lard (palmitic acid) and showed that coconut oil’s benefits may be due to caprylic acid because this fatty acid alone was similarly protective against mortality and diabetes.  They also showed lard’s malevolence is not due to palmitic acid because these rats were almost just as protected as those fed caprylic acid.  This somewhat excludes a role of fatty acid length as caprylic acid has 8 carbons while palmitic acid has 16, but both are fully saturated (suggesting a possible detrimental role for unsaturated fatty acids [?]).

So why is coconut oil so good?

One possible reason:  saturated fatty acids are protective, which is supported by the beneficial effect of coconut oil, caprylic acid, and palmitic acid.  Similarly, lard and Swift’ning have a lot of unsaturated fats and both were detrimental. 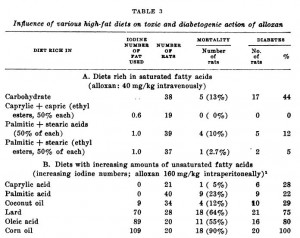 As to the role of ketones, which I think is quite important… to be continued